History of Beer in Anatolia and Near East

The definition of beer based on the food codex explains the complete process of making beer. First; barley malt, malt and extract substances are grinded together, then processed with hot water. Hops are added next, boiled, cooled and left for fermentation. The final product may or may not be filtered and pastorized yielding a drink called beer, that is either clear or blurred. Beer has been through a long history that is about 9 or 10 thousand years old before reaching this definition.

Barley and wheat has been the main staple in the near east regions, however for the most part wheat was in the limelight whereas barley, the raw material of beer, was in the background.  However barley was also as old and effective as wheat in the part it played in the development of civilizations. The first place barley was grown and cultivated is, the southwest of the ‘prosperous crescent’ region, in other words, the general region of Syria, Israel and Jordan. 10,000 – 12,000 Years ago, barley traveled to souteast Anatolia, Iran and then continued to China via Afghanistan, Himalayas and Tibet. The archeobotanic findings in the souteast part of Anatolia also backs up this theory.

Hordeum vulgare, in other words barley, was always grown in the the same geography and appeared in the same cultures as wheat, however it was never used in bread making as wheat.  Barley was mainly used for making beer, soups, meat stews, tea or feedcrop for sick people and people who are confined to bed. The history of beer goes back before the written times, because of this reason it would be impossible to think of beer independantly of barley. Mesopotamia, and Anatolian civilizations have always produced beer from barley, therefore these near east cultures are considered as the inventors of beer.

The first written information about barley and beer comes from the documents of Mesapotamian civilizations. In Sumerian language the word ŠE is used for barley. In Hitite language it is called halki. In Hitite texts KAŠ.[i], the Sumerian ideograph was used for the word barley. In Akkadian language barley was called ŠIKÃRU, and in Hitite language it was šeššar.[ii] Oldest mention of production and consumption of beer is seen in visual recordings, cylindirical seals and on certain cups. Among these findings the most significant one is found on the 12th layer in Tepe Gawra (an Ancient settlement in Mesapotamia located in today’s Northwest Iraq) from 4th century B.C. One of the findings is a seal, showing two people standing over a vat and drinking with a pipe.[iii] 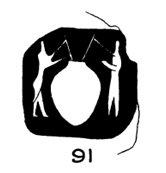 A piece of ceramic, that belonged to Early Bronze Age was found during the excavations in İmamoğlu Tumulus in Malatya, that shows a similar scene.[iv] (Pictured below) 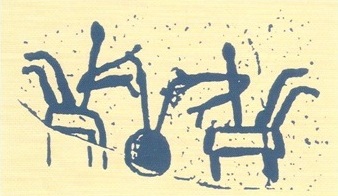 Beer today is produced by malt that has been sprouted from barley and mixed with hops and fermented.  However in ancient civilizations such as Hitites, Egyptians or Mesapotamians, the production of beer is made with a different method. The first thing we have to know is that hops (Humulus lupulus) either did not exist in that time period or it wasn’t used in beer-making. Barley was not the only grain used in making beer, millet or wheat was used as well.  During this production, malt was produced using the classical methods, and then roasted or dried in order to stop the sprouting. Hitites called this product tepšu- meaning “dry” or “a grain that cannot sprout” and haššatar NU.GÁL “infertile” or “grain that does not have ability to sprout”.[v] These roasted malts, were used whenever needed, by pounding into a powder form, mixed with water and left for fermentation. Therefore whether its the Hitites or any of the neareast civilizations, all the beer made, resembled an unstrained thick drink with soupy consistency and sediments. Therefore using a straw was necessary to drink it.

In the written documents of the Hitite culture, not much information can be found regarding this matter. However considering the written documents of the Egyptians and Mesapotamians, who also lived in the same time period, and also some Hitite documents, there is some information pointing out the importance of beer and the use of similar beer making methods. Hitites, just like their synchro, used sprouted wheat, oats or millet and malt  to make a type of beer bread called BAPPIR, NINDA.KAŠ. When needed they would add spices and other additives and ferment to make it into a drink.[vi]

In the excavations done in Kuşaklı/Sarissa, found in Altınyayla town of Sivas, the archeologists have encountered a building - building C – where they found various beer related artifacts like bowls, straws, strainers, which signifies once again the importance given to beer by Hitites.[vii]

In conclusion, in Anatolian, Mesapotamian and Egyptin civilizations, barley was used in making a highly nutritious drink – beer – and not in making bread. It is clear that the beer from those time periods were unlike the beer consumed today. It did not contain gas, have  barley malt sediments, therefore drank with straws made from lead or wood and was low in alcoholic content. 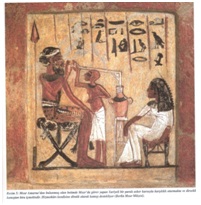 Homer also mentioned the nutritious aspects of a drink made from malt. This drink is called kykeon, which literally means batter or a thick drink. It is important to take a look at the passage below from Illiad, Homer’s eternal work, to see how he explained kykeon.

“…Hekameda, with her beautiful hair made them kykeon. The old man had brought Hekamede from Tenedos. Hekamede first pulled the table in front of her. A dark, shiny, polished table. She placed an onion and a bronze plate filled with golden honey, on the table. Then arrived the holy barley flour. The woman prepared kykeon for them using Pramnos wine. In it she grated goat’s milk cheese, sprinkled barley flour, and when kykeon was ready invited them…”[viii] Although until today nobody knows exactly what kykeon is, researchers have come up with ideas and even tried to make it. The only trials that were quite successful were Dalby and Grainger’s trials. These two researchers, have used roasted and grounded barley flour, heating it with wine, honey and goat cheese and made a food that looked like a batter.[ix] However it would be a correct assumption to look for the roots of kykeon in barley malt.

In summary, beer has been produced for about 10.000 years, ever since the humans have been domesticating grains. Beer making is closely related and has an important place in the neareast cultures.  Even though in the later years beer was replaced first with wine and then with distilled drinks, beer has created its own culture and holds an important place until today.