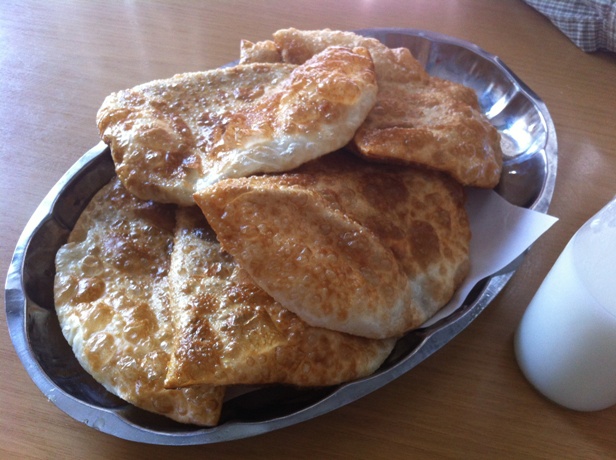 Instructions
Sift the flour on a work surface and make a hole in the middle. Break the egg into the hole, and then add water and salt to make stiff dough. Divide the dough into 20 pieces. Leave them to rest under a damp towel for 20 minutes. Chop the onions very finely, mix together with salt and pepper, then mince. Knead the dough very well. Stretch each piece of dough to a small circle and place a spoonful of the mince mixture. Fold the circle in half. Fry in oil until golden brown. 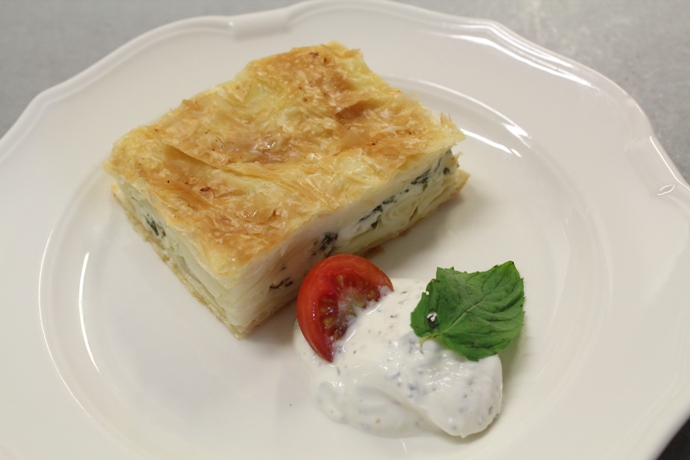 Stuffing:
Mincemeat stuffing; ¾ lb. of minced beef, 1 small onion, 2 tbsp. olive oil, 1 tsp. salt. Finely mince the onions and sauté them in olive oil until softened slightly. Add the minced meat and salt, and sauté together until the meat is cooked through.

Spinach stuffing; 1 lb. spinach, 1 small onion, 1 tsp. salt, 2 tbsp. olive oil. Wash and trim the spinach
and blanch in boiling water until wilted just slightly. Chop the spinach and set it aside. Finely chop the onions and sauté in olive oil until softened completely. Add the spinach and salt and cook for about 1 more minute. 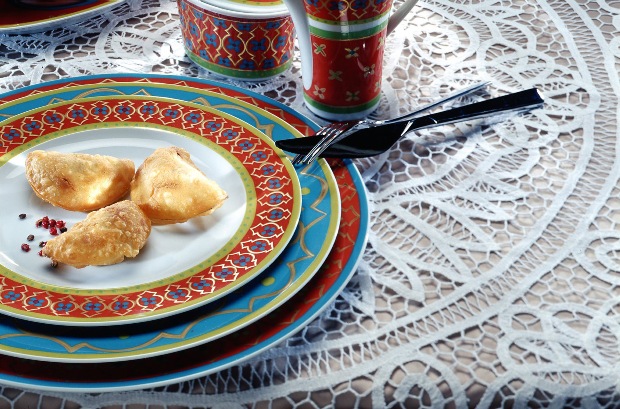 Instructions
Sift the flour, make a hole in the middle, and add the eggs, melted butter, salt and water. Knead well. Divide the dough into two pieces and place under a damp towel. Let it rest for 20 minutes. Stretch the dough to a sheet that is thicker than yufka, brush with half of the melted butter, fold the ends to the middle, and stretch again. Rest for 10 minutes under a damp towel. Repeat this process 6 times for each of the dough pieces. At the end, lay one of the dough sheets on the work surface, place the filling 5 cm apart, and lay the other dough on top. Cut rounds, squares, or half-moon shapes by trying to keep the filling in the middle. Fry in hot oil until golden brown. Transfer to a plate lined with paper towel. Serve hot.

Instructions
Heat the oven to 320F. Wash and trim the wild herbs. In a pan heat 2 tbsp. of olive oil and start sautéing the onions until softened, add salt and wild herbs and stir for a couple of times then take off the heat. Let it cool. Once cooled add the cheese and black pepper. In a separate bowl whisk the milk, egg, and rest of the olive oil to prepare the sauce. Cut the dough in quarters. Take a piece of dough, brush with the sauce. Place 2 tbsp. of the herb & cheese mixture on the wide end. Fold in the sides and then start rolling towards the pointy end. Place on a greased oven tray. Do the same for the rest of the dough. Brush the top of the pies with egg yolk (you may sprinkle some sesame or nigella seeds on top) bake in the oven until they turn golden brown, about 30 minutes.